In the middle of the new negotiations, before the Referendum in Greece


1) Who do you believe responsible of the negociation failure between Greece and EU? 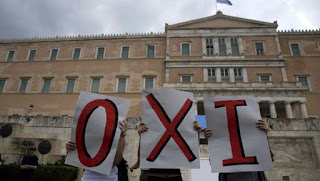 In my opinion, the Eurogroup has pressured too much in this process. Although the Greek Government would have accepted moderating many red lines, proposing an own proposal, the Eurogroup, and mainly the IMF has refused not only the several times already moderated proposal from Greece but also the original points that the Greek Government had included. For instance, referring to reestructuration on Debt or tax reform. It is clear that the former Troika doesn't accept an own thought of the indebted countries under its financial dominion. The IMF tried to defeat further the Syriza Government benefiting of its more than kind and reasonable approach in a blackmail context. It was too much abuse. It would have humiliated its position, and that attitude was too much hard to accept for a proud and worth Government as the Greek is.

2) You took part to the Truth Committee on Public debt. What did the Committee  find out and how relevant are your findings in today crisis?

A group of thirty analysts have assessed the origin of the Greek Public Debt within the last thirty years, with a special focus on the Memoranda of Understanding period. In the macroeconomic chapter we have seen that the increasing of public debt started in 90's due to a snowball effect because the high interest rate of those years. After the implementation of euro the public debt raised in a low share, because the interest rate decreased. Against the prejudice commonly extended, the public expenses was a little lower than the average in EU. The defence expenditure, in a context of corruption, has been once of the higher in EU in all this years and that is another reason of the increasing of public debt. But the problem has raised mainly in the post 2010 period due to the austerity measures imposed in the two memorandum of understanding. They caused a decrease of 25% of GDP in Greece.
But the consequences of these policies imposed from abroad, being important, not are as relevant as the mechanism of debt prison established in this horrible period.
We have examined how the 90% of the loans has not been used for the Greek budget on the general interest of population. It has been debt to repay, not to financing nothing for the future, to avoid any default that could affect USA banks in order to not to respond to the responsibilities derivated of swaps insurance. We have seen how the public european institution has replaced the former private creditors in order to free the exposure to the risk of them. This means that we are in front of a paneuropean socialization of losses operation.
We have seen how several Member States has lent to Greece under strange mechanism, not only bilateral loans -lending from a Member State to another, something that is forbidden within the EU legislation-, but mainly a mutualised fund as it is the European Fund Stability Facility, and it succesor the European Stability Mechanism, completely illegal and odious in the framework of the EU legislation, breaching the EU Functioning Treaty. The 48% of the Greek Debt is property of this sinister fund.

3)  What do you think about the Greek referendum: was it the right choice?.

Tsipras had no choice. If he would have accepted the drastic conditions of the former Troika that would mean the final of its democratic mandate. He could be decide directly, but he has preferred to consult to the Greek population. He fights for a better pact, but I am afraid that he is brave not to be afraid about to take another way, because he chooses that is more important the people than creditors interests. My opinion is very clear, Greek people has many reasons to vote no to the last week Eurogroup conditions, although also I think it is necessary to go further. We have to know exactly the question for the Referendum to evaluate it.

Some measures as a selective default, bank intervention, how to combine the euro with some another kind of currencies (IoU, electronic money, or a new dracma), a progressive tax reform, an investment plan and a new international financing framework has to be defined in the next days. People have to watch what kind of future they are facing.

4) How do you envision Europe future if Greece will vote No? And what if it say Yes?

If No wins the Government has to implement a scheme responding the last questions to be define in the ground. Is Yes wins that could lead to a new general elections, and it created a new vicious circle of austerity in Greece, with the horrible perspective that the people will feel defeated. But the devil is in the details and we have to know exactly the question for the Referendum.

5) Is Ecb playing a fair game with Greece?

The ECB has not developed a neutral an independent policy, against the mandate by the Treaties.

We have seen how the ECB has speculated with Greek bonds in 2012, buying them very cheap in the financial market, giving a sweeter or compensation to the former private creditor, demanding after to the Greek people to be returned at the original value. We have observed how ECB has not disbursed or make feasible the access to the normal loans and financing that another countries have received, for example recently the Quantitative Easing. ECB has discriminated to Greece. There are many reasons to denounce its behaviour.

6) Do you believe that if winning the election in Spain Podemos could encounter the same kind of hostility that Syriza is facing now?

I am afraid that it could happen. We have to be in solidarity for Greece, because its destination is ours. We have to learn about the paths they are going to do. And if they lose this battle, we have to prepare us together for the next one.

7) Another Europe is still possible?

I have no doubt, another Europe is possible. But I am afraid that the current EU architecture impedes a Europe of solidarity. If finally it is not possible changing this EU as it is we have to explore the building of another supranational solution, with some European countries or whatever countries could contribute for a greater solidarity and democracy.