Last May, the European United Left / Nordic Confederation Group (GUE / NGL) decided to turn its traditional support for the Social and Solidarity Economy (SSE) into one of its main strategic focuses for this legislature (2014-2019).

Therefore, GUE/NGL Group has set as one of its main goals for 2016 the organization of the first European Forum of Social and Solidarity Economy (EFSSE), aiming at promoting an exchange of experiences among the different actors in the SSE in Europe, highlighting the problems faced by the sector, as well as its potential in tackling the effects of the crisis. Specific actions of political impact will be proposed, intended to foster the consolidation and expansion of the SSE within the EU.

(Of course) There Is An Alternative 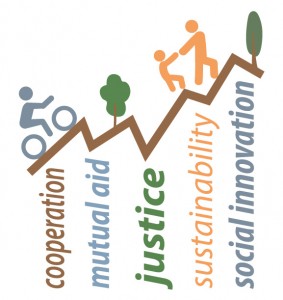 Social and Solidarity Economy represents an alternative proposal to the dominant economic-productive model. The SSE understands the economy not as a goal but as a tool to achieve personal and community welfare and development.
Integrating economic activities centered on people, their communities and the environment, the SSE affects not only the way production is carried on but all the aspects of the economic process. It promotes fairer relations of production and a different approach to the goods distribution process, encourage responsible consumption and even shift the traditional schemes of financing activities.
The SSE consists of cooperatives, associations, social enterprises and associations of informal workers, other grassroots groups and individuals that are all guided by principles of justice, democracy, cooperation, reciprocity, mutual aid and sustainability.

Fairer and More Resilient Against Crisis

The economic importance of the SSE is beyond any doubt, representing over 14 million jobs (6.5% of total employment in the EU) and having proved to be extraordinary resilient to the impacts of the crisis concerning unemployment. It is a booming sector, which generates qualitative benefits, which although difficult to be measured, have the potential to improve the quality of democracy while proposing frames of production and reproduction more compatible with fairer and more sustainable societies.

If you want to follow more in several languages: